Reducing Energy Use with Daylighting: See why Polycarbonate beats FRP A pair of near-identical machine shop sheds (approximately 12,910 sq ft) were chosen for the test. The units operated for 24 hours per day/300 days per year and were illuminated by 200 watt metal halide lamps.

By installing an energy meter in the main lighting distribution board of the respective units, power consumption was able to be measured over a week before sheets were added to the roof covering to provide daylight for the shed. An identical set of measurements were taken to record the illuminance level at different times of day at various places. The SUNSKY sheets were installed on the roof of the other shed. A timer was installed to monitor the period during which the lamps were actually switched off.

Both energy consumption and lamp off-time were monitored by noting the requisite data on a day-to-day basis. The illuminance levels were measured once per week at different times of the day in both sheds at the same time intervals. After five years of testing, there was virtually no savings in the unit with the FRP, mainly due to reduced light transmission of the sheets over time. Keep reading below to see findings made during the case study: 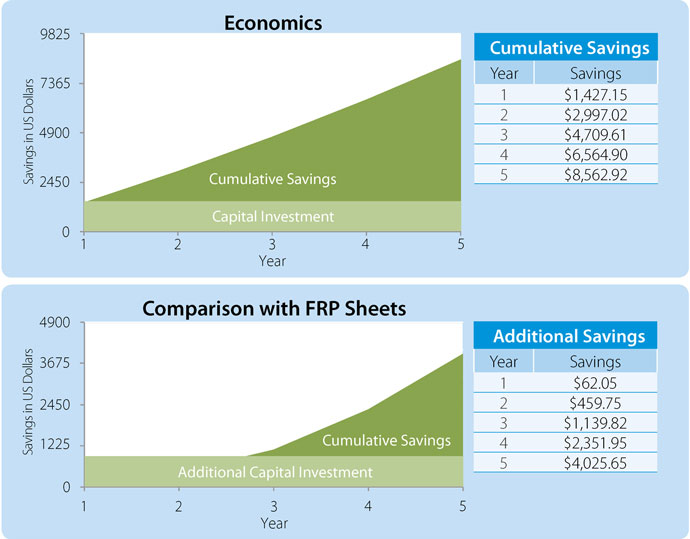 Whether you’re a contractor, fabricator, designer, architect, printer, or even a homeowner interested in DIY projects, Palram’s range of polycarbonate and PVC solutions will help transform your vision into reality. Together, we will build on.